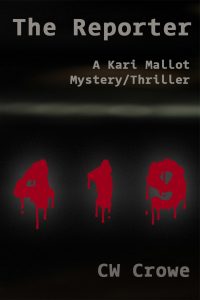 The Reporter is my attempt at expanding my writing into new directions – it’s a mystery/thriller.

And it’s a good one.  From the societal avenger who is known only by the cryptic name of Four One Nine, to the lifelike characters who carry the story along, you’ll never see what’s coming.

The Reporter is written in third person which lets me get deeper into the other characters.  I think you’ll like them – and especially Kari Mallot.  Kari is ambitious and willing to do what it takes to be a nationally known reporter.

But she has no idea what price she might be called on to pay.

As always, I will very much appreciate a review!