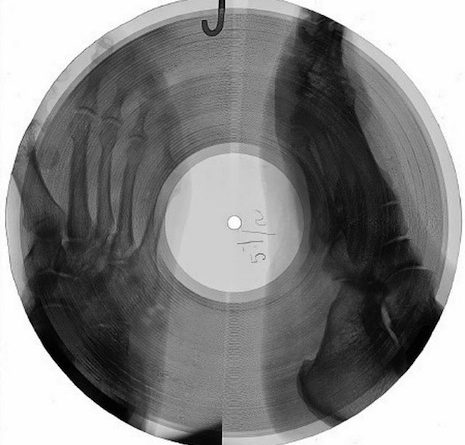 My day job is in audio, so this is of interest to me – and I hope to you!

There are many different kinds of sound recordings to collect and listen to. You have LPs and 45s, 78s, Diamond Discs, Cylinders, wire recordings, tape and bones.

Bones? Is this type of recording new to you? If so, prepare to enjoy one of the strangest stories in recorded audio history.

It all started in the 1950s Soviet Union. Record players were common, and records were made in large numbers, but all of the music was prepared and approved by the state. There was no rock and roll, no jazz, no blues.

There was also a very large demand for forbidden music and so ingenious Russian entrepreneurs came up with an answer: they would cobble up a lathe – a turntable with a cutting needle on it. They could then play a bootleg Elvis or Little Richard record and use this audio to drive the lathe and make a copy. It was a real-time process in that it took three minutes to copy a three minute record.

But that wasn’t the whole story. You see, blank vinyl records were difficult to find so they had to come up with a substitute.

The answer? Old X-ray pictures made by hospitals. They traded a small bottle of vodka for an arm full of old x-rays, cut a circle out of them and burned a hole in the center with a cigarette. The result was a material that could be cut on the recording lathe. The audio was frequently very noisy and of low quality, but these recordings, known as bones, were very popular. People went to jail for making and selling them.

They are also quite amazing in that you can see the picture of a wrist or hand or brain on the xray as you put your Beatles record on your player.